You all are probably starting to wonder why I always disappear on you all and don’t post for a while. Well since it’s been three weeks I’ve had time to think up some quality excuses. Writer’s block. I’m secretly a magician pulling a disappearing act. Shady internet. But the truth is I’ve been a bit lazy with it. Lots to catch you all up on so keep reading!

After making the finals of the previous tournament, I had another tournament that started in three days. This tournament was being held at the club where my friend and I train, so I’d be lying if I said I wasn’t a bit nervous. Before the tournament even started, people from the club who I had never spoken a word to in my life were coming up to me telling me how I had to do well and win for Flemalle. Pressure isn’t a bad thing, but it definitely made me want to do well and make a good first impression with my tennis. I rolled through my first two matches easily and found myself in the semifinals on Saturday night. My match didn’t start until 8:30 or so at night, so the people at the club had already had plenty of time to enjoy the festivities and get rowdy before the match started. I battled my way to the first set 7-5. I wasn’t playing my best tennis, but I was staying tough mentally and pulled out some big points. In the second set, I got crushed 6-2. My opponent completely changed his game plan and I had trouble adjusting. In the third set, I found myself up an early break serving 3-1 and 40-15 on my serve when my opponent hit two incredible shots and ended up breaking back. I immediately broke again and was serving at 4-2 30-30 when luck swung against me and my opponent got a net cord winner. My opponent actually served for the match at 5-4 in the third set but I broke back to stay alive. I then went up 6-5 and had a break point, also a match point, but my opponent hit an unreturnable serve. Ultimately I lost 7-6 in the third set.

To say I was furious after this match is an understatement. After 3 hours of battling and playing my heart out, I came up short. Worst of all, Belgium has a weird custom where after a match you’re supposed to share a drink with your opponent. Now, I’m not a sore loser at all, but share a drink with the guy I just went to war with? I don’t think so. I need a little time to mellow out after a match like that or it won’t be pretty.

With that tournament over, I could finally focus on what I had been looking forward to for the previous three weeks. I’m sure plenty of you have already seen the video, but I managed to surprise my family on vacation in Colorado. With my dad’s help, we planned it to where I would fly in to Denver and then surprise my mom and brother’s for our family snowboarding trip. It was pretty tough keeping it to ourselves for that long and I know we both almost slipped up, but ultimately we pulled it off and I couldn’t have been happier. After being alone for so long, it was great to be with my family again. If you haven’t seen it, check out the video of my mom on my dad’s facebook page. I’ve also posted it along with this link. That’s a video I will cherish my entire life. 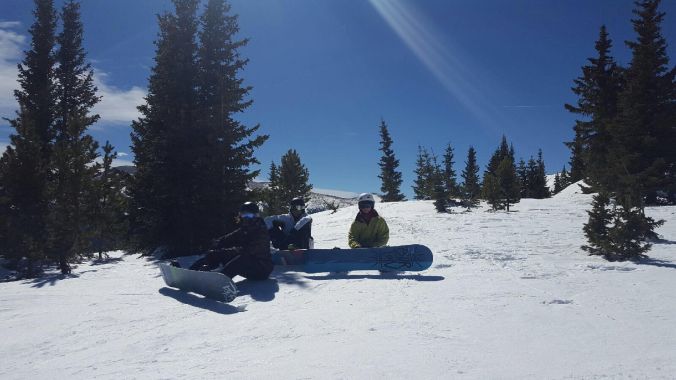 My brothers and I on the mountain 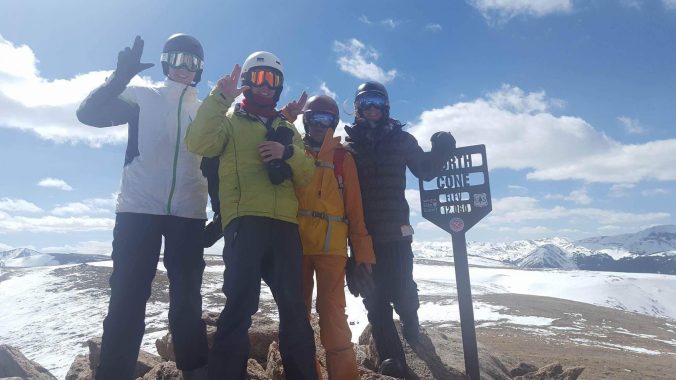 From left to right: Ben, me, my dad, and Austin showing Louisville some love 12,000 feet up

I hadn’t snowboarded a single day in the previous 5 years, so I was also super excited to get back out on the slopes. When we were younger, my dad introduced my brothers and I to snowboarding and we’ve been powder hounds ever since. The annual trip out west to find some fresh snow was always one of the highlights of the year for us.

Luckily, I didn’t make a complete fool of myself. I was definitely a little rusty starting off, but after a few runs on the groomers I got my snow legs back under me. The conditions were pretty subpar while we were there. Not much fresh snow which means a lot of ice— not ideal for a group of boarders that loves going through the trees. I did a couple of tree runs with my brothers but honestly it was pretty miserable. The runs were completely tracked out and if you fell you’d be sliding until you found a tree kind enough to stop you.

Even though I only got two days on snow, I had an absolute blast. Honestly I could have just sat around all day and would have been happy just being with my family again. Seeing the looks on their faces when I showed up at the airports has to rank as one of the top moments in my life to this point. The only downside to the trip (well for me, my dad and brothers found it pretty amusing) was that on the second day we were doing a run when I completely ate it. I was going pretty fast when I caught an edge on some ice and flipped forward landing right on my shoulder and sliding down the mountain at least 100 yards before coming to a stop. 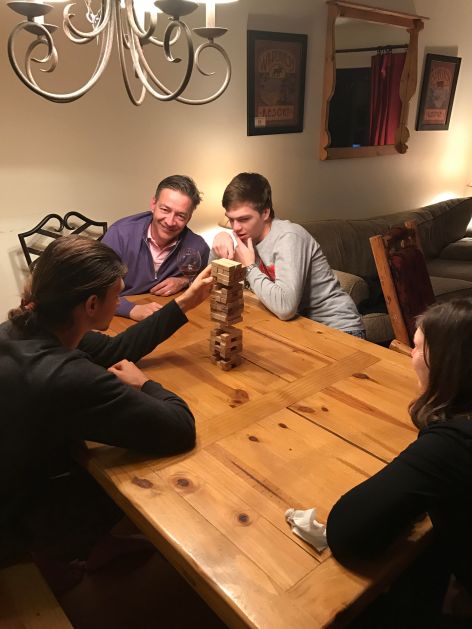 When I came back to Louisville I also got the chance to surprise some more people. I surprised both my grandmas, Gram and Mimi, and they both looked like they saw a ghost when I showed up at the door. I wish I could have captured their faces when they first realized it was me there. The last people I wanted to surprise were my best friends Chris and Kelsey. They’ve been through it all with me, so I couldn’t wait to see them. I had my mom tell them she had a housewarming gift for them but really it was just me hiding in the back seat. Hopefully it wasn’t a letdown for them when it was just me! 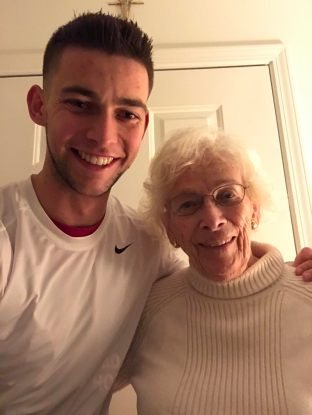 Whenever I’m back in town, I feel like life is pretty stressful and hectic, but I don’t mind. Besides keeping up with my regular schedule of practice and training, I’m also running around trying to catch up with a million people in the few days I have here. I also got the chance to go out and watch the Louisville Men’s Tennis team play some ACC matches. I’m still good friends with a couple of guys on the team so I wanted to see how they were doing. After being around the matches, it makes me miss some parts of college tennis. The team, the atmosphere, the intensity. In futures, there’s hardly ever fans out there so it’s a very different lifestyle.

Tomorrow I’m heading out for tournaments. Before you start getting jealous about what country I’ll be heading to this time I’m going to have to tell you to take a deep breath and calm down because this time I’m just playing in the states, much to Gram’s pleasure; I think she wore out her rosary praying for my safety while I was over in Belgium. I’ll start off in Memphis and then head down to Little Rock and two tournaments in Florida. It will be an adjustment playing outdoors, but I’m ready for some sunshine.

To finish off my stay in Louisville, we just finished up a “family” dinner. I use quotation marks because my best friends Chris and Kelsey were there, but they are honorary Gornet’s at this point. Whenever I do come back we’ve made it a habit of them coming over for dinner with my family, and it’s always a great time. If you ever want to experience an unconventional dinner, just show up at our house and we’ll entertain you for hours.

Hopefully I haven’t angered the gluten free gods, but I broke down tonight and cracked. After the gourmet dinner cooked by my chef of a mom (I’m still trying to convince her to start a cooking show), we had cinnamon rolls for dessert. And I might have just had one too many. 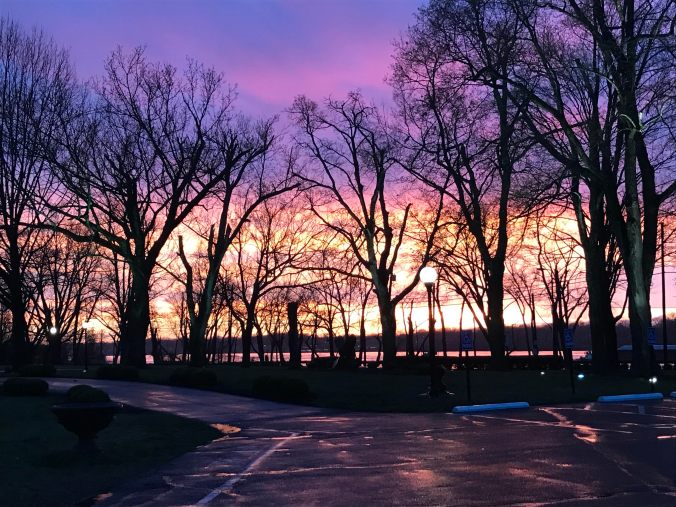 Trees messing up a fantastic view, but nothing beats a Louisville sunset

One thought on “I Ate Too Many Cinnamon Rolls”

Where am I now?

Back home in Louisville! Just finished up applying to MBA programs. Now the wait begins…